Jeff Pelich taught in a classroom for over a decade, where he experienced bruises, bite marks and scratches when he was dealing with these kinds of situations. "Situations" means violent students and he says this problem is getting worse. Click the video below to view to hear the whole story from the CTV New Kitchener segment aired January 18, 2017.
[video width="960" height="540" mp4="https://wrdsbeaa.com/wp-content/uploads/2017/01/CTV-Kitchener_-Classroom-violence-concerns.mp4"][/video]
38214&binId=1.1147261&playlistPageNum=1

cp24 News Media Conference held by ETFO, Sam Hammond speaking to reporters[/caption]
Chris Fox, CP24.com
Published Tuesday, January 17, 2017 3:10PM EST
Last Updated Tuesday, January 17, 2017 3:52PM EST
The head of a union representing Ontario elementary school teachers says a “critical lack of support” for students with behavioural issues has given rise to an increasing number of violent incidents in classrooms across the province.
Elementary Teachers’ Federation of Ontario President Sam Hammond made the comment to reporters on Tuesday afternoon as he discussed a meeting between the leadership of his union and the provincial ministers of labour and education that is scheduled for tomorrow.
ETFO requested the meeting last year amid concerns over what it said has been an increase in classroom violence. 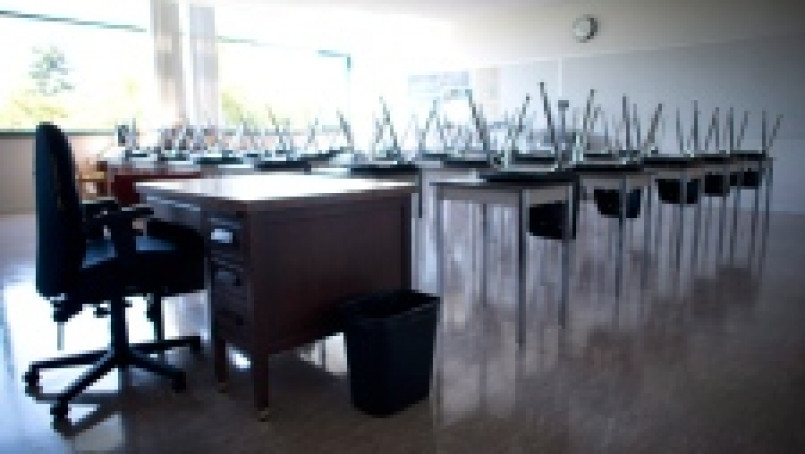 An empty classroom is shown in this undated file photograph. (The Canadian Press/Jonathan Hayward)[/caption]
“There is a critical lack of support for our students facing serious behavioural issues that can lead to violent incidents in the classroom. Many of these students are suffering and we need to step up and help them,” Hammond said. “There are inadequate social services and mental health supports for them and that means too many students are a on a waiting list instead of being provided with vital early interventions.”
Hammond said that funding for special needs programs has not kept up with the “growing needs within our schools” or, for that matter, even the “rate of inflation.”
Among other things, Hammond said the province must work to address the wait list for special education services, the shortfall in special education budgets, and the need for more special education teachers, educational assistants and school psychologists.

aid that there also needs to be a better system for the reporting of health and safety concerns and better training for all employees and not just teachers.
“We think (the province) need to do something about it today,” Hammond said. “It is not just a matter of increasing the funding. It is doing an overall better job, including looking at the funding formula.”
Violence is widespread
Hammond did not provide any numbers to back up his claims of an increase in violence in the classroom but said that “it happens every day in a classroom or multiple classrooms across the province.”
That message was backed up by the presidents of several union locals, who joined Hammond for the press conference.
“Every day I speak to teachers about the challenges they face in the classrooms that can become so difficult and stressful that they end up taking time off work,” Shirley Bell of the Kawartha Pine Ridge local said. “Our board does the best that they can with limited resources available but with increasing needs resources are spread so thin that we are left trying to offer Band-Aid solutions.”
“I see situations where due to a shortfall in special education funding, principals are forced to cluster students with special education needs in one classroom. In one case a teacher reported to me that more than half of their students were on an individual education plan,” Simcoe County local President Janet Bigham said. “Special education staff is stretched so thin that they are not able to meet the need of all students. Students then become frustrated and anxious in that type of learning environment and act out in response. It could be a refusal to follow teacher directions, a verbal outburst or physical aggression. We can’t allow this type of environment to become the norm.”

Members,
Login to view all articles